Skip to content
kaleidoscope49 Where Credit Is Due September 15, 2020 6 Minutes

I vaguely remember reading a fascinating library book quite a few years ago that was basically a list of famous and influential people. Although I don’t remember it well enough to be sure, I think it was the one pictured here: 1000 Years of Famous People by Clive Gifford. I remember being amazed just how many famous historical people have played a role in shaping our world. But what’s even more amazing is just how many people have lived in the past, achieved things, made a difference in the world around them, and barely been remembered by history at all.

Among all the billions of people who have ever lived, no more than a few thousand could be classified as “famous”. In fact, if the criteria for “fame” are specified to require that a person’s name has to be familiar to most people and frequently mentioned in history textbooks, it’s probably fair to say that there are only a couple hundred truly famous historical figures. And that makes sense. A social studies curriculum can only cover so many topics, and an individual person can only remember so many names and dates. But in a way, it’d be nice if we could remember and recognize the contributions of a greater number of people.

That’s the main reason that I decided to start this series of blog posts about the not-so-famous people who did something fame-worthy. I kicked it off last month by re-posting something from my old blog about Osbourn Dorsey, who was born into slavery, invented the doorknob, and then essentially disappeared into historical oblivion. This month, I’m writing about someone who made it a little bigger, although he’s still not exactly a household name. But he’s had a significant impact on your life if you’ve eaten much chocolate within the last two hundred years.

His name was Coenraad Johannes Van Houten, and he was born on March 15, 1801 in Amsterdam. 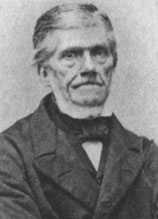 In all fairness, I should start by pointing out that his father and son, both named Casparus Van Houten, each deserve a share of the credit. As far as can be inferred from the church’s baptismal records, Coenraad was the second of four children born to Casparus and his wife, Arnoldina Koster. There was an older sister named Hermina and two younger brothers named Dirk and Johannes, all of whom survived to adulthood. In 1806, when Coenraad was only five, his father opened a coffee and spice shop in Amsterdam, and Coenraad evidently spent his childhood working with his father. In 1815, the Van Houten company expanded to chocolate.

Prior to that time, chocolate wasn’t very common in that part of Europe and was generally only consumed as a beverage, not as a candy. The cacao bean had first made its way to Europe in 1502, when Christopher Columbus brought some back to Spain after his fourth expedition to the New World, and other explorers such as conquistador Hernan Cortez tasted the cacao bean beverages of the Aztecs. Because of its bitter flavor, it took a while to catch on in Europe, and it seems that its consumption in Europe was mostly limited to Spain for at least a century. By the 1700s, the Dutch people were certainly aware of chocolate, but the Van Houten company was largely responsible for popularizing chocolate in the Netherlands and making it more affordable to the general public.

The Van Houtens’ chocolate factory started operations on May 16, 1815.  Like other chocolate factories of the time, they simply ran the cacao beans through a mill to grind it into a gritty, oily paste that could be added to milk, along with spices, to create a creamier, sweeter version of the cacao beverage consumed by the Aztecs. (The beans themselves were imported from South American plantations that still relied on slave labor to plant, harvest, ferment, dry, and roast the beans.)

The Van Houtens went on to make two major innovations in the processing of chocolate. I’m seeing some conflicting information as to when these innovations happened, and even which one came first. For the sake of this blog post, I’m going to assume that the correct dates are the ones from the website run by the company that now owns the Van Houten brand. Their website references patent dates.

In 1828, Casparus Van Houten invented the hydraulic cocoa press, which separated the fat of the cacao bean, generally called cocoa butter, from the solids, which are the cocoa powder.  This invention is often attributed to Coenraad, and given the fact that the two were a father-son team who worked closely together,I think it’s fair to assume that the cocoa press was indeed a team effort and that Coenraad does deserve partial credit for it.

Cocoa powder and cocoa butter as we know them today are the direct results of the Van Houtens’  invention. This is a big deal not only because those products are sometimes sold and used separately, but also because most chocolate candy (including solid chocolate bars, chocolate chips, and chocolate that’s intended for baking) has a higher ratio of cocoa butter to cocoa solids than the beans themselves do. That means that the substance we call chocolate has a milder flavor and a creamier texture than it would if the fats and solids from the cacao beans had never been separated.

The second Van Houten innovation was a method for treating the cacao with alkaline potassium carbonates, resulting in a milder, less bitter flavor. The resulting cocoa powder was also more water soluble, making it more conducive to producing chocolate products of a variety of textures. The method, which came to be known as Dutch processing, was patented in 1846, but the Van Houten company had probably been using it long before that time, perhaps as soon as they started working with chocolate. 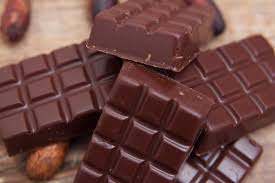 Although the Dutch processing method that the Van Houtens developed was a major milestone in chocolate history, it’s not the norm for processing chocolate now. Cocoa powder that’s used for baking comes in two varieties, “natural unsweetened” and “Dutch-processed”. If you don’t know offhand which kind of cocoa powder you have in your kitchen right now, it’s probably natural. Natural unsweetened cocoa powder is a light or medium brown color with a very strong flavor, and it’s slightly acidic. Dutch-processed cocoa powder is a darker color with a smoother, milder flavor, and it’s not acidic. The two kinds are generally interchangeable if you’re making something like pudding or frosting that doesn’t need to rise like bread. But if you’re making cakes, brownies, or something else bread-like, the acid content makes a difference, and the proportion of baking soda to baking powder is a relevant factor. Unless you’re an expert in the chemistry of baking, you’re better off only using Dutch-processed cocoa powder if the recipe specifically calls for it.

But that’s enough tangential information about how to use cocoa powder; let’s get back to Van Houten’s life story. By this time, Coenraad had married a woman who coincidentally had the exact same name as his sister, Hermina Van Houten. Evidently, Coenraad’s wife was no relation despite the shared last name. Coenraad and Hermina had eight children, two of whom died as infants. By the time that Coenraad’s youngest child was born in 1851, the Van Houten company was expanding, had moved production to the town of Wesep, and had started exporting chocolate to other parts of Europe. Caspurus died in 1858, leaving Coenraad solely in charge of the company. But in 1864, Van Houten’s twenty-year-old son, also named Caspurus, became an official partner. The younger Caspurus was known to have a knack for marketing. By the time of Coenraad Van Houten’s death in 1887, Van Houten was a successful brand worldwide, including in the United States. I can’t find information about Coenraad’s cause of death, even after seeing a picture of his death certificate, but since he was 86, I’m guessing it was age-related natural causes.

The Van Houten company has another interesting claim to fame that happened long after Coenraad’s death. They were perhaps the first business to use film for advertising. That was in 1899, just a few years after the invention of movies. (Depending upon how you define a “movie”, you could make a case for arguing that movies were invented a couple decades earlier, but let’s not go into the details of that timeline right now.) The commercial depicted an ailing patient who makes a miraculous recovery after eating chocolate. It’s a pretty ridiculous little film, but let’s be honest here, I can relate. Sometimes, a little chocolate makes everything better. So in my opinion, we owe a little historical attention to inventors like Coenraad Van Houten whose contributions led to chocolate as we know it today.